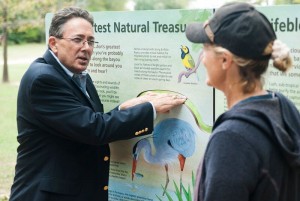 Join Houston-based consultancy Interpretive Insights on a short guided hike through Terry Hershey Park on Buffalo Bayou, just 40 minutes west of the Houston Medical Center. Led by Amanda Hughes-Horan, Principal of Interpretive Insights, attendees will have an opportunity to learn more about the importance of interpretation and how well-planned interpretive signage along trails can greatly enhance the outdoor experience. Attendees will discover more about Buffalo Bayou and also see newly completed interpretation along the Terry Hershey Hike and Bike Trail.

Attendees will have opportunities to engage with Amanda Hughes-Horan of Interpretive Insights during the tour. This session is designed to open up an informal discussion about how to plan effective resource interpretation for hike and bike trails. 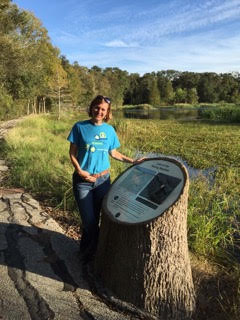 Amanda Hughes-Horan is the Principal of Interpretive Insights, a Houston-based environmental consultancy specializing in planning and designing interpretive signage and other educational media for parks, nature centers and other clients.

She was an Interpretive Planner with the Texas Parks and Wildlife Department from 1993-2011, and was responsible for the development of natural history exhibits and interpretive signage in numerous State Parks from the mountains of far-west Texas to the Panhandle and Texas Pineywoods.

Amanda established Interpretive Insights in 2008 and has continued to build up an extensive portfolio of interpretive projects for a wide variety of clients in both private and public sectors including the Houston Parks Board, Texas A&M University, municipal governments, schools, nature centers, and non-profits.

Originally from the United Kingdom, Amanda has a B.A. Honors degree in Modern Languages from the University of Westminster, and an M.Sc. in Wildlife Biology from Colorado State University. She is married with one daughter and is passionate about natural resource conservation and helping people connect with nature and the Great Outdoors.