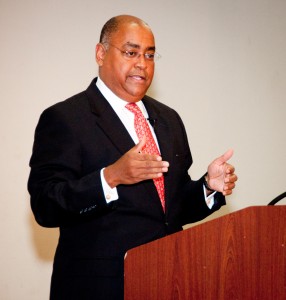 Senator Rodney Ellis was elected to the Texas Senate in 1990. During his tenure, he has been leader on economic development, education, civil rights, responsible environmental policy, middle class tax cuts, and criminal justice issues, having passed over 600 bills. He is the proud founder of the Texas Legislative Internship Program (TLIP). Since TLIP’s inception, it has become the largest legislative internship program in the state, giving over 650 young people the opportunity to make a difference in Texas politics and public policy. Three former TLIP participants are currently members of the Texas House of Representatives.

Senator Ellis is a member of the Senate State Affairs, Business & Commerce, and Transportation committees. In past sessions, he chaired the Senate Finance, Jurisprudence, Intergovernmental Relations, Government Organization, and Open Government committees. Senator Ellis chairs the Board of Directors for the Innocence Project and co-chairs the National Conference of State Legislatures Task Force on International Relations. He also serves on the National Conference of State Legislatures Executive Committee, the LBJ Foundation Board of Trustees, and the Council on Foreign Relations.

Before his election to the Texas Senate, Senator Ellis served three terms as a member of the Houston City Council and as chief of staff to the late U.S. Congressman Mickey Leland. He holds a bachelor’s degree from Texas Southern University, a master’s degree from the Lyndon B. Johnson School of Public Affairs, and a law degree from the University of Texas School of Law. Ellis also studied at Xavier University of New Orleans and the London School of Economics. Rodney Ellis is married to Licia Green-Ellis and has four children. 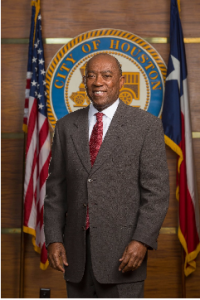 Sylvester Turner was born and raised in the Acres Homes community in northwest Houston. His parents moved to Acres Homes in 1954, the year Sylvester was born. Sylvester’s mother worked as a maid in the old Rice Hotel in Houston. His father worked as a painter for Continental Ensco and cut yards with his sons on the weekends to make extra money. The Turners raised nine children in their modest two-bedroom home in Acres Homes. Sylvester lost his father to cancer when he was 13 years old. Afterward, his mother took over the Turner household. Although she never finished high school or learned to drive, she ensured her children got an education and inspired them to achieve. Sylvester attended neighborhood public schools until forced integration came to Houston and he was bused to Klein High School. After a predictably rocky start, the student body adapted to its new enrollees – and Sylvester was later elected president of the student body and graduated as valedictorian.

Sylvester graduated from the University of Houston and Harvard Law School before joining the law firm of Fulbright & Jaworski. He later founded the Houston law firm of Barnes & Turner in 1983. In 1988, Sylvester was elected to the Texas House of Representatives to serve the people of House District 139 in Northwest Houston. He served until his election as mayor, working on the House Appropriations Committee for 21 years and serving as Speaker Pro Tem for three terms.  He was appointed to several Budget Conference Committees to help balance the state’s budget and served on the Legislative Budget Board. He is very proud of his daughter Ashley, who is continuing the Turner family tradition of public service in the healthcare field.